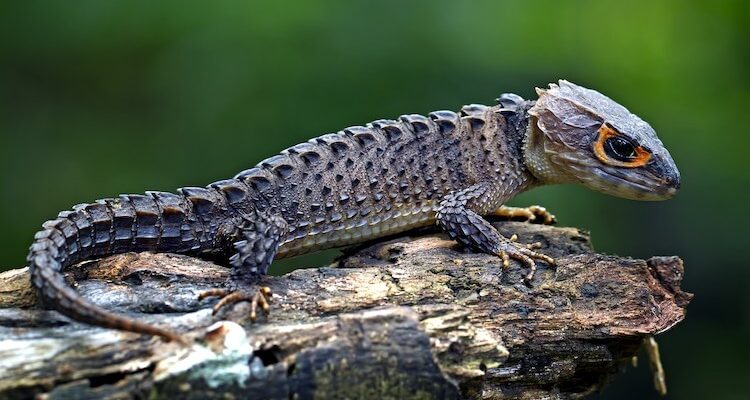 The Red-Eyed Crocodile Skink are usually crepuscular and shy lizards who remain active mostly at twilight periods like dawn and dusk.

In sheer size, they are comparatively small to other captive Geckos and are rather content feeding on small insects such as crickets and other invertebrate species within every 48 hours.

Furthermore, the Red Eye Crocodile Skink doesn’t like being poked, prodded, or handled by humans. And whenever they sense potential danger, they apparently lose their tail and completely freeze (play dead). They can easily pretend to stay dead for as they sense the potential danger near them!

You will come across 8 different species off the red-eyed croc lizard in the genus Tribolonotus found in regions of the Irian Jaya, Papua New Guinea, and stretching to the Solomon Islands.

In fact, the Tribolonotus gracilis and T. novaeguineae found in the Papua New Guinea, Admiralty Isles, and Irian Jaya are the two popular species seen in its pet trade.

Its Other Remaining 6 Species Are As Follows –

Moreover, the red-eyed croc skinks prefer spending the majority of their time on damp grounds remaining hidden within wood logs or dense bushes. Full-grown adults will appear in a greyish-black colour. Around their eyes will have a solid reddish-orange ring- and probably where they get their name red-eyed croc skinks!

That said, the juvenile ones will consist of a light coloured head, and with time as they age, their heads will darken.

Let’s Begin With Their Appropriate Housing…!

Ideally, the red-eyed crock skink hails from cool and moist locations- usually present in the New Guinea regions. These lizards are not much climbers. That said, they can climb lowly handing branches or if their safety and survival depended on it.

If you are brave and diligent enough to keep red-eye crock skink as your pet, you need to focus more on their enclosure floor space instead of its height! As per experienced traders, the ideal options include as –

Another thing to remember is – it would be best to either keep red-eye croc skinks singly or in pairs – male with a female!

So it’s best to make use of eco earth or a jungle mix base mixed with NZ spaghnum moss casing atop it. They both will aid in preserving the moisture level and resultantly increase the overall humidity levels too!

You should also a good mix of taller foliage and low-lying foliage to ensure your Red-eyed croc skink feels rather comfortable living or coming out. It’s very much their nature to be close to spots, which lets them duck for cover whenever they feel threatened! To create this convenience, you can use terra rock hides, terra fern, and even terra hanging plants. Some pet traders even recommend including a live plant!

The Appropriate Heating & Lighting for Their Proper Survival…!

To properly care for your red-eyed croc skink pet, appropriate lighting is very important! Especially since its UVB bulb radiation emboldens more production of vitamin D3 along with some pre-vitamin D3 acquired isomerizes.

Your pet skink will have access to UVB lights 12 hours in a day with proper lighting arrangements. That’s why you should be particular about the quality and brand of UVB bulb you choose. Alternatively, you can opt for natural lighting options- but only if they assuredly deliver frequent and uniform exposure!

Still, the better option is to go for UVB bulbs, which are known to deliver 12 straight hours of artificial daylight consistently!

But that’s not all…

In addition to UVB lighting, you should also look to add a heat lamp as a means to create a proper basking spot having temperature readings in between 80-82 degrees F.

Some pet traders even suggest keeping underneath the tank heating unit to ensure the tank enclosure remains at the appropriate temperature, which is in –between 75-78 degrees F.

To make sure the correct amount of heat circulates inside the tank, you should add thermometers in both areas. Along with that, the container must be misted twice or thrice every day to ensure the humidity levels consistently stay in-between 70-90%.

(As Previously Started Above…)

So, keep these in mind when feeding your red-eye croc skink and use terras worm dishes to feed them.

Along with that, also remember to supplement your pet crock skink’s meals with a recommended dose of calcium. You can use zoomed calcium loaded with D3 for the best healthier results. If you notice them not eating the meal completely, remove the left-overs, and properly sanitize that spot to avoid any contamination!

Another thing – just like all lizard species, you should keep a water bowl for them to feed. Ideally, you should go for a shallow water bowl as it proves to be the best choice to prevent them from knocking over the bowl!

You also need to be cautious when handling your pet croc skink. Typically, these lizard species don’t prefer being handled and would appear quiet and stiff when you take them in your hand. The best course of action would be to refrain from handling them frequently as it raises their stress levels.

You also should provide the appropriate environment for their survival and temperament. This will keep them active most times and even motivate them to come out of hiding during the daytime, particularly if that’s the time you’ve chosen to feed them!

Experts and pet traders often recommend washing of hands properly before even thinking about handing these red-eyed croc skinks. According to them, this is one appropriate way to ensure optimal hygiene, both your pet croc skink as well as yours.

Also, when you have to handle them, be sure to do it flat-handed. And, of course, keep them close to the surface just so they choose to jump.

The typical lifespan of a red-eyed croc skink is between 5-12 years. And similar to any other lizard species, they too can possibly suffer from some type of metabolic bone condition, which typically is caused due to deficiency in calcium in their body. That’s why; supplementing each of their diets (as stated above) is paramount!

When your pet red-eyed skink experiences a metabolic bone ailment, their wobbly walking will be the common noticeable symptom.

Tail autotomy is another occurrence which you will associate with your pet’s red-eyed croc skink. In simpler terms, whenever your pet croc skink feels endangered, they tend to rid their tail. That said, their regeneration capabilities allow them to re-grow their tail in time.

However, experts and pet traders state their disposed tail is potentially prone to bacterial contagions, especially since the tank’s moisture levels will be in-between 70-90% and can support such bacterial infection growth.

That is precisely why; you being its owner, should take the responsibility of cleaning their residing tank to avoid such possible infections from endangering them.

Also, remember not to bathe your pet red-eyed croc skink. That, too, increases their overall level of stress due. Just let them be as generally, they don’t have any troubles shedding their skin.

For Your Better Understanding, Here Are Some Signs To Be Sure On Your Part That Your Pet Red-Eyed Croc Skink Is Healthy.

And Here Are Some Common Symptoms Of Their Sickness…

What about Their Breeding?

In terms of breeding, red-eyed croc skinks are often very aggressive to their same-sex-. This is more so in case of croc skink males.

In female croc skinks, only their right oviduct is functional despite consisting of 2 functional ovaries. So, their eggs must move over from the left ovary to the right before oviposition. At the time of their breeding season, a total of 6 eggs are laid for 6 weeks. Usually, that period is between December and March when they survive in their natural habit in Papua New Guinea.

However, when they are stored captive, you can initiate breeding whenever you want, provided you frequent mist and maintain the tank’s appropriate humidity levels.

You do need to condition them properly for proper reproduction prior to making them breed. And for the task, you have to carefully select a healthy adult pair and allow them ample time to make themselves get used to their new residing environment!

When the pairing time comes around, you should make sure you feed them each day. You can mix it up with a wide variety of worms, insects, and bugs- all of which are staple diets of the red-eyed croc skink. And while you do this, don’t forget to supplement their meals with the right dosage of vitamin D3.

Most experts and pet traders recommend properly incubating their eggs to be the best way to achieve optimal hatching outcomes. You have to carefully take the egg from its nest, bury it partially inside one ventilated ampule, and fill it up with soggy peat moss. While you do it, make sure you don’t transpose the eggs differently to their actual nest’s orientation. Set the moisture level of the incubation moss in such a way that when it is squeezed, no excess water will leak.

The incubation time extends roughly from 65-85 days at max, provided they are kept at a temperature reading in-between 73-81 degrees.

Croc Skink egg hatching are small, ranging from 6-8 cms, and right within few hours of its hatching, the young skinks will look for a right hiding spot and food!

To satiate their needs, you should look to feed these young croc skinks properly with insects, bugs, crickets, and so on, all properly busted with an appropriate dosage of calcium D3 supplement.  When selecting their prey, be sure to pick them not larger than the young-skink eye’s space.

The red-eyed croc skinks are indeed wonderful creatures. And if you choose you to take one as your pet and dedicatedly look after them, then there is a good chance that they can live close to 10 years.

Whenever you look at them- be it at the zoo, pet-trader shop, or at your place; they never cease to amaze.  They have brightly coloured red eyes, which clearly pops out with their glossy dark scales. And they have unique voices that are different to other existing skink species.

Overall, they make for exotic looking pets to your home.

So, if you are intrigued, inspired, and utterly interested in owning a red-eyed crocodile skink as your domestic pet, then be sure to follow the aforementioned care guide properly.

After all, this care guide will prove crucial for their health and longer survival.

Hi! I'm Lauren and I love to travel. Follow along as I travel around the globe and share my favorite places.
Recent Travels
Copyright Total WordPress Theme - All Rights Reserved 2022
Back To Top
×Close search
Search