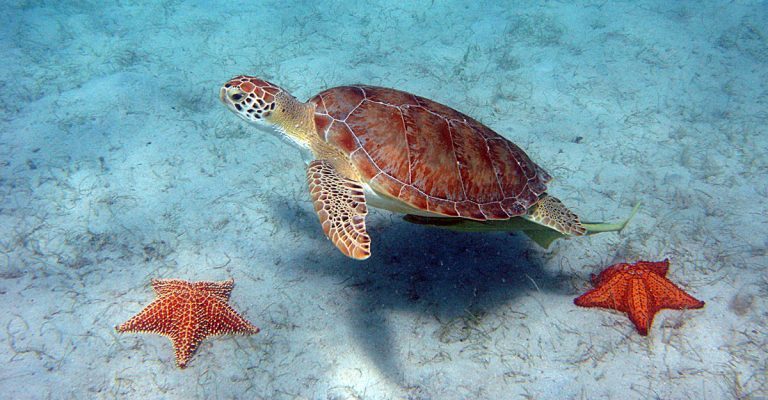 Literature that was available in the 1950s indicated that turtles were deaf and could not vocalize. Since the theory seemed conclusive, researchers showed no internet in studying the matter until decades later when they discovered that turtles communicate through sound.

What Sounds Do Turtles Usually Make?

Hissing is the most common noise that turtles will make. While hissing in snakes could indicate hostility, in turtles, it shows fear. You can approach a hissing turtle without being attacked.

The first thing you notice as the turtle hisses is that they withdraw into their shell. This involuntary sound stems from the lungs; therefore, the turtle uses the back movement to force air out of the lungs. When you pick up the turtle, the hissing may stop when the turtles realize you mean them no harm, but sometimes the turtle may continue hissing until you put it down.

Apart from hissing, turtles produce sounds when mating or being aggressive. These sounds are different from hissing, so you need to know the distinction if you have a pet turtle.

While most animals enjoy being touched, this is not the case for turtles. Turtles, just like snakes, can receive training to get used to handling by humans. For snakes, the trainer uses a hook to signify when it is feeding time. The hook tap is different from regular handling; hence the snake knows the difference.

For turtles, you can train them by giving them small amounts of food with each handling so that they normalize you touching them. After a while, your pet turtle will let you touch them without hissing. If you just got a pet turtle, don’t worry; they will hiss continuously at first, and then after they get used to you, they will enjoy your touch.

Turtles are typically cool animals; they do get aggressive in certain situations. There are many reasons behind a turtle’s aggressiveness but in most cases is if they are feeling threatened or frustrated. Turtles that live in cramped spaces tend to be aggressive because they compete for food or a basking spot.

Also, because turtles do not enjoy being touched unnecessarily, they may get aggressive when strangers come close. Snapper turtles are mostly known for being aggressive for this reason. Please do not go around touching turtles unless you are familiar with them because your hand might turn to finger food for the turtle.

The noise produced by aggressive turtles is a combination of hissing and heavy breathing. This move intends to scare you into running away just like a porcupine flares its quills to scare away the enemy before attacking.

Animals have mating rituals in place that may be hard to understand but are necessary. Mating sounds are a clear indication the mating season has arrived, and action is required. When turtles are immersed in the action, they produce sounds that are hard to miss. These distinct mating sounds are continuous and will stop once mating ends.

To the human ear, these sounds may be funny at first, and you may even chuckle. But with time, you get used to it, especially with land-inhabiting turtles. These sounds are not too loud in young turtles, but the noise is hard to miss for larger, older turtles.

However, not all turtles do this because map turtles emit a low-frequency sound while mating that the human ear might miss.

Nature is diverse, so not all turtles will behave in the same way. While land turtles produce sounds to protect themselves from harm or to mate, large Amazon River turtles utilize sounds to find their way around the dark and murky water. It can be compared to the dolphins using echolocation for orientation and hunting. These Amazon River Turtles communicate using echolocation while migrating to nesting bitches or during communal nesting.

In southern China and Southeast Asia, a variety of turtles known as the big-headed turtle emits a unique sound when lifted from the water. The sound produced is comparable to a roar, and this roar is very useful in keeping predators at bay. If you hear the roar, you would be scared too.

Because the sea is still under research, we do not have too much information to categorize sea turtles and the noises they produce. However, there is data showing a range of vocalization between Leatherback turtles and their hatchlings.

While the Leatherback sea turtle embryos begin vocalizing after 51 days of incubation, the Arrau turtle soon-to-be hatchlings vocalize between 8 to 36 hours before hatching. Mother turtles vocalize to get the hatchlings’ attention and pass the necessary messages. Like we stated above, there still ongoing research on the vocalization of aquatic turtles; thus, in the future, we will understand the different messages passed between the mother and her hatchlings.

To make a clear distinction between the noises produced by these turtles, herpetologists chose to categorize them into four sections, as shown below;

Working as a team in nature is a recipe for success because there are many odds stacked against the hatchlings in order to survive. For the embryos to emerge from the nest simultaneously, they vocalize among themselves to pass the message that it is time to dig. With a clear goal in mind, the embryos try to break the shell with as much energy as they can master.

Sea turtles do not stay behind to take care of their young, so the hatchlings are on their own. Once hatched, the hatchlings find their way to the sea to start life.

We can define what turtle embryos do as giving each other morale. Since there are so many risks facing them as they go into the sea, they have to move as one group. If each embryo hatched singularly, the risk of survival would be lower because the predators like birds and ghost crabs would obliterate them once they emerged from the sand.

Once they hatch as a team, they move towards the ocean as a team. If a predator is lurking by, they won’t be able to eat all the turtles at once, so the survivors live on to see another day.

You might be thinking, why would hatchlings need to attract females? Well, it is not for mating reasons but instead for direction. Arrau turtle hatchlings vocalize, attracting the female Arrau turtles, who guide them to the forest floor where the turtles feed. If the hatchlings do not do this, their rate of survival lowers.

Within two weeks, the Arrau turtles and the hatchlings migrate over 38miles to reach more suitable grounds. The low pitch of the hatchling is convenient as a loud pitch would attract predators from hiding.

Unlike dogs or cats, turtles are not the most vivid communicators, but they communicate with humans in their own ways. Using the hissing sound can scare away a possible threat while still maintaining composure not to attack. When the hissing eventually tops, this signifies to the pet-owner that the animal is relaxing.

Due to excitement or hunger, turtles in aquariums knock on the glass to get the human’s attention. If they see that the human is not responsive, they will knock the glass several times until they get a reaction. Sometimes the turtles just want attention, so they will knock on the glass continuously, even at night; when this happens, turn off the lights and see if the knocking will stop.

Without some form of communication, the world would be in utter chaos both for animals and humans—people in the past underestimated turtles believing that they were dumb only to discover otherwise. Now, we know that turtles are not deaf because they are sensitive to loud noises, and they communicate with different sounds.

While they are not the most interactive pets on the planet, they do have a charm that is hard to resist. More research is underway as we continue to discover how turtles communicate in the sea and on land. In the future, we will have more information about these fascinating animals, and we can’t wait.

Turtles are some of the most beautiful creatures. In the wild, they live as they are…

Can Turtles Breathe Through Their Butts

Turtles are reptiles that are well-known in the animal kingdom as a doppelganger to tortoises. We…

Hi! I'm Lauren and I love to travel. Follow along as I travel around the globe and share my favorite places.
Recent Travels
Copyright Total WordPress Theme - All Rights Reserved 2023
Back To Top
×Close search
Search