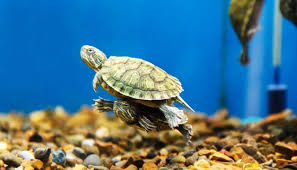 Turtles are reptiles that are well-known in the animal kingdom as a doppelganger to tortoises. We further digress for the sake of those who are still unable to tell the two apart.

Despite the similarities between these two, they have plenty of differences. There is an observed significant difference in their places of dwelling. A tortoise is to land as a turtle is to water for most parts of its life.

Anyway, as we steer back to the main topic, did you know that turtles spend most of their life in water and that they can breathe through their backside? Yeah, you read that right!

This article will take you through that fascinating fact alongside other minor but necessary details to help you know more about turtles and how their breathing system is structured—all these in the simplest way and possibly technical jargon-free.

While we get into it, it is essential to note that turtles exist in different types. Some are semi-aquatic, and conversely, there are aquatic turtles.

However, this article endeavors to focus more on water turtles. A few of these sea-living turtle categories include painted, cooters, sliders, pond, which can be further subdivided into Japanese pond turtles, and so forth.

This phenomenon has several synonyms, such as cloacal respiration. In animate beings, respiration is the process that involves breathing in oxygen and breathing out carbon dioxide.

The term cloacal is coined from the cloaca, which is the principal part that facilitates this breathing process in turtles. When we piece these two definitions together, we get the meaning of cloacal respiration.

Therefore, cloacal respiration is the unique breathing process in turtles that involves using its backside or anus known as cloaca to take in and release oxygen and carbon dioxide, respectively.

Another point to note is that cloacal respiration is mostly exercised in extremely cold periods such as winter. Unlike other weather seasons, winter makes it impossible to periodically swim to the surface for extra oxygen supply as usually a thick ice crust forms on waterbodies.

This massively limits the oxygen supply for sea creatures like turtles forcing them to go into hiding and inactivity known as hibernation. Mostly, the hibernation period is dictated by the weather pattern in a given area.

In some instances, the turtles may migrate to other parts with conducive climates. However, the turtles caught between a rock and a hard place have to employ this phenomenon to survive.

Breathing system of a turtle

This system comprises specific structures and organs that facilitate cloacal respiration. Every species has unique organs and structures set up to ensure sufficient oxygen supply throughout the body.

Some of the turtles’ respiratory features include lungs, external nares, cloaca, and an air passage known as the trachea. Their shell is the human equivalent of a chest that houses the ribs.

Their shell is a rigid bony structure that is beefed up with muscles for easier expansion and contraction during the action of breathing in and out. The external nares, in other words, are known as nostrils. Universally nostrils are usually the main air entrance and exit.

After air gains entrance through the external nares, it meets the glottis, then the flexible trachea. The trachea’s flexible nature is what facilitates its head motion. The trachea divides into two bronchi which bring oxygen-filled air to the lungs that later gets supplied to the rest of the body.

However, the aforementioned process can only occur under normal circumstances with conducive weather as it requires the turtles to swim to the waterbody surface for extra oxygen.

During unfavorable weather conditions, with winter as the prime example, turtles resort to hibernation. Since they can no longer swim to the surface when in need of oxygen, they resort to butt breathing.

Before diving into how the cloaca is specially structured to facilitate this process, it is vital to remember that turtles are cold-blooded. This plays a significant role in this process by limiting its metabolic rate.

Cold-blooded animals’ temperatures spontaneously increase or decrease depending on the external weather conditions. Hence cold-blooded reptiles are most active during the day, and inactivity increases as nighttime approaches.

The same logic applies during winter when the conditions are unbearable, with low temperatures. Low temperatures, as discussed, lead to low activity, and thus metabolism will be slow as the turtles are reserving all the available energy for respiration.

The cloaca is the human equivalent of an anus that takes water in and out of the turtle’s body. It is a powerful muscle that can expand and contract. Just like how an adult’s respiratory system is more advanced than a child’s, the same case applies to turtles and their different species.

For instance, some turtle species will have denser blood vessels to increase the surface area of oxygen absorption, and other species have oxygen-absorbing throats as opposed to the cloaca. These are just a few of the adaptation variations in the turtle species.

A major limiting factor is the reduction of oxygen levels in water during the hibernation period. In this case, hibernating species are structurally able to resort to respiring anaerobically, leading to lactic acid accumulation.

Lactic acid is a toxic body waste, and it is usually neutralized by calcium carbonates released from the turtle’s shell.

A turtle, like any other species, is not exempt from drowning. Factors that may lead to drowning include overexertion resulting in using up all reserved oxygen, over-accumulation of lactic acid, and drastic temperature changes.

These drastic temperature changes result from marine heatwaves, which are a consequence of global warming that negatively affects marine life.

High temperatures result in increased metabolic rates, which is dangerous while turtles are underwater. These warm spells may also reduce oxygen levels underwater.

At this point, we have established a lot and comprehensively demonstrated that turtles indeed use butt-breathing during the hibernation period. However, this specific adaption is relative as it is only seen in some turtle species.

We hope that this article has helped you gain essential insights concerning a turtle’s respiration process.

Turtles are some of the most beautiful creatures. In the wild, they live as they are…

Literature that was available in the 1950s indicated that turtles were deaf and could not vocalize.…

Hi! I'm Lauren and I love to travel. Follow along as I travel around the globe and share my favorite places.
Recent Travels
Copyright Total WordPress Theme - All Rights Reserved 2023
Back To Top
×Close search
Search