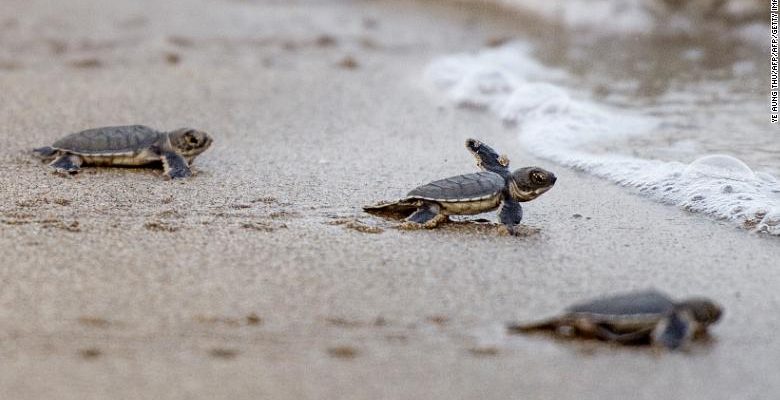 There are many opportunities to observe hatching or nesting of sea turtles when you go on a vacation or as a volunteer. Many times tourism industries contribute in conserving the sea turtles. Many sea turtle species are vulnerable and classified as endangered.

Hatching and Caring of the Young

This is a 4-step process where volunteers or individuals help the sea turtles to thrive. Nowadays there are strict laws which need to be followed and no one should interfere in the nesting process. Even the tourist or the people who are volunteering should not be allowed to cause distress to the turtle. In some cases, the eggs are moved from the nest and are placed in the hatcheries. If there is a lot of human interference the eggs can be moved to artificial nests or reburied in the protected beach area. The volunteers can help the hatchlings and can assist in holding back or releasing the turtle later on. Many times the hatchlings are kept in tanks. The hatcheries were invented with good intentions but most of the time they don’t serve the purpose.

The time of incubation differs with different species, size of the clutch, humidity and temperature maintained in the nest. The incubation time lasts for many species for 45-70 days. Check out our Types of Turtles page for some great species identification tips and tricks.

The sea turtles keep hatching all year but it mostly hatches in summer. Hatchlings generally use a temporary egg tooth to break the shell open. The turtles which are born after hatching may take 3 to 7 days and dig the ground to find their way to the surface. They generally wait until the night time to come out of the nest. When they come out at night it will protect exposure to the predators during daytime. Hatchlings occur more during night time. Many species of sea turtles are born if the nest is left undisturbed. It is said that 90% of the clutch hatch successfully if given the right conditions. Nests disturbed by humans or predators tend to give 25% success rates.

There are many ways which researchers approve to suggest how hatchlings find the sea.

The Years Which Are Lost

When the hatchlings enter the ocean most of the sea turtles are rarely seen for a year or more. This is known as “lost years”.

Researchers have come to a conclusion that most hatchlings live their first few years of life in the deep ocean before they appear in coastal areas. The migratory patterns of the young ones during the first years are still a matter of discussion amongst most researchers as most of them say that they ride on the surface currents and generally place themselves on the floating sea weeds. Also finding food for themselves.

Many great researchers say that flatback hatchlings do not go through the lost years phase. The young turtles remain near the shore continuously swimming. Many stay within 15 km range from the land.

What Are the Main Issues with Hatcheries?

The Hatcheries of the Turtle should not be considered as zoos or rehabilitation centers. This should be used when the nesting of the turtle is disturbed. This may be because of the condition such as flooding, or is suffering from poaching or erosion. The rate of success is extreme and very hard to monitor, once the turtle is hatched. The young turtles vanish into the sea for almost a decade and generally between 10 and 30 years to become an adult, depending on the type of sea turtle. So, there are many issues such as sickness, diseases, gender of the turtles does become known until they come back to the nest.

The other issue is the ‘imprinting’ of the area of the beach in the turtle’s mind. The turtles which are female only lay their eggs on the beach where they were born any fluctuation in their basic journey to the sea and can spoil the process of imprinting and affect the habit of their nesting in the pure future.

There is one more issue as well in the hatcheries of Sri Lanka. The biggest threat to the sea turtles is the stealing of eggs. Some hatcheries have begun to buy eggs from poachers. This has obviously saved many eggs from getting eaten up. There are many problems now, as there is a market for the eggs. The poachers take advantage of the   knowledge that they will be paid for the hatcheries.

What Are the Potential Problems?

The issues with hatcheries are limited.

Sex ratios. The temperature in which the eggs are kept surely affects the sex of the embryo, at higher temperatures you get female hatchlings. However, this is very hard to achieve, if there is any gender imbalance it will only be known when the turtle’s nest which would be a decade or more down the line. However, if the temperature is very high or becomes very low the young ones would die.

If the sand is too dry it will dehydrate the eggs they would stop developing. Now if the sand is wet sand or is very compact it would reduce the circulation of the oxygen and also be the cause of problems for the hatchlings.

If there is a requirement to remove the eggs it should be done within 5 hours of laying eggs. If the removal process is done after the expected time limit, it would pose high risk. The membranes of the turtle will rupture and the embryos will die.

The Hatcheries must be dug in a different area every year to prevent any spread of infectious disease. The fluid that leaks for the egg can become a breeding ground for bacteria and fungus. Make sure that there is a gap of almost 2 years while creating the hatchery in the same location. If there are limited options you can, treat the sand – it can be sifted, treated with chlorine and left in for proper sunlight. This process takes a long time and has a lot of risks.

Hatcheries must be on a constant watch for poachers and there is a constant need to count the hatchlings, so that if they are trapped anywhere, you can free them. If you can’t release the hatchling very soon. Make sure to place some damp soil and keep them in a dark area. If you release them in water, they will swim continuously.

Many predators such as birds, fish and dogs. If you hold them for a longer period before releasing. They will use all their energy before they are even near the sea.

You should always need some nests intact on the beaches. Make sure the hatchery contains only 50% of the eggs. If not, it will be like adding all eggs in a basket. It may also be affected badly by storm flood, high tides and even erosion of sand.

Ideally everyone should promote the sea turtle initiative to preserve the eggs as it is and conserve its habitat. It should only be done only if the conditions are not favorable. You should make sure that the hatcheries are managed by experienced individuals who are qualified to take care of the turtles and make sure they survive the difficult period of their life. Handling eggs and new born is a very difficult thing to do and should always be done by wearing the proper latex gloves.

There should be people to monitor and evaluate that the hatchery is serving the purpose and should make sure that the eggs hatch and the health of the embryo is perfect. They should also tag the turtles, check how many return from the sea to the same location and even keep measuring their size. This will bring a great change in the conservation of the turtles.

Peninsula River Cooter Turtles Care Guide Do you love turtles? They can be the most gorgeous…

Hi! I'm Lauren and I love to travel. Follow along as I travel around the globe and share my favorite places.
Recent Travels
Copyright Total WordPress Theme - All Rights Reserved 2021
Back To Top
×Close search
Search